Diego Maradona Cry For Me Argentina

The tragic ending saga of the Diego Maradona story can leave one with feeling empathy for the diminutive Argentinian, mixed with a bittersweet taste. Maradona for his sins and there have been plenty, was aided and abetted by the sinful one’s residing in Napoli, named the Carrara, Napoli’s drug cartel who embraced Maradona with cocaine filtering into one’s nose, alongside the array of prostitutes who were there for the ride. Set up, stitched up, fearful, but Maradona had a choice, no, that two letter word failed Maradona and the Argentine’s football world as it stands today is of a tarnished icon.

To give a brief outline, no, not coke, Maradona transferred in 1985 after two tepid years at FC Barcelona to Napoli. To the Neapolitans, Naples is the centre of their universe, that changed on Maradona’s arrival who was revered as a god like figure and in time was the inspiration behind Napoli’s Serie A trophy winning years during the 1986-87 season, to be followed two seasons later with a second title in the 1989-90 season. The first titles delivered were history breaking first feats for the classification of a low ranked club in Italy at the time, with the club’s bank vault’s Lira running low. The Lira signs for the Maradona transfer came courtesy of the drug cartels, their hidden agenda, their mission, was to impose a drug addiction on Diego, they sought control over his body and mind, they succeeded and the downward spiral began.

One year on from Maradona’s arrival in Napoli, the 1986 World Cup in Mexico beckoned, the drug fiends had not impacted on Diego at this stage. The Argentina captain’s armband was the given responsibility, came with the territory, the quest to deliver a World Cup for Argentina followed, Maradona’s driven desires delivered the World Cup, the world’s greatest player, Diego became on football’s greatest stage, breath taking performances were showcased, the world watched in awe, on the way to the final Maradona cheated England at the quarter final stage with the ‘Hand of God’. Forever etched on our inner being, Maradona stained us with the hand of corruption, to all English supporters, the immovable inner tattoo, the hurt is still felt today, the St George flag flies at half mast in reflection. In between the 1986 and 1990 World Cups, the world’s greatest delivered two Serie A championships for the people of Napoli who were later to turn against their adopted one, alongside Diego’s powdered white line addiction kicking in, cocaine.

Onto the 1990 World Cup in Italy, Diego momentarily ditched the drugs, looking to get up speed, no not that drug as well, for match fitness. Remarkably Maradona succeeded, a relentless work ethic in the gymnasium and on the running track led the World’s greatest back to the world stage of supreme fitness levels. Argentina progressed to the semi finals, which ironically led to facing the hosts, Italy at Diego’s adopted home at the San Paulo stadium, Napoli. Maradona’s pre match plea to the Neapolitans to support Argentina was met with derision and hatred for their demi god who over night became the devil to all sins, Argentina lost the match and Maradona lost his soul.

The treatment that followed was shameful, the greatness was sniffed away, a waft of sadness prevails, the loss of one of the world’s greatest players to have ever lived. Today Maradona plies what’s left as manager of Argentina club side Gimnasia, has Diego become imprisoned to one’s life capsule which led to becoming a traitor to one’s conscience, wipe away the tears with the ‘Hand of God’.

In the Annals of History

In honour of Diego, the number 10 shirt lies in retirement, to many observers, Maradona is the greatest player of all time.

The third World Cup for Diego ended with the Argentinian being banned during tournament play, displaying a crazed face to the world’s watching gallery, eyes bulging, veins pumping, the devil’s tongue gasping for more, licking the cocaine off Diego’s nose, post match tested, all was revealed, it ended in disgrace. A footballing genius, a career tarnished, mixed with a library of magical football moments, and then the other world, skewered like a rat, which one do you want to remember? Diego Maradona, ‘Cry for me Argentina’. 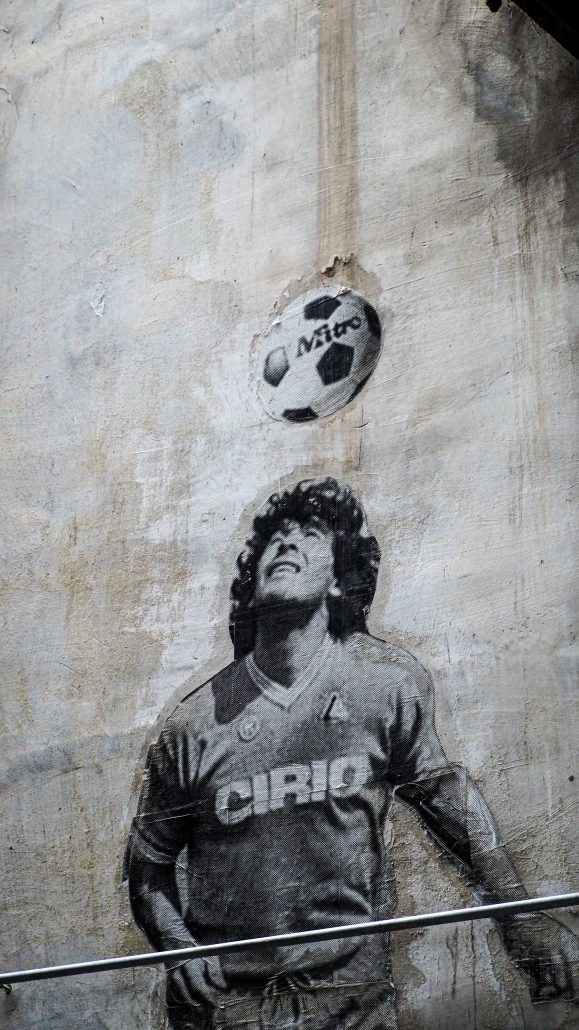 A Questioning of One’s Ethics

Factored in the Manero Theme v Barcelona
Scroll to top