Ronaldo v Messi – Who is the World’s Number 1 Player?

So Who is the greatest player on the planet? As the Football Column delves into each player’s technical abilities, desire, and work ethic, in a points analysis format, to determine the world’s greatest player, under the Manero radar.

Messi’s origins of the Argentinian style were gendered in Lionel with the sheer genius of his boyhood idol, Diego Maradona, similar in statue with the low gravity movement, to encompass all of Maradona, a genius in motion to captivate the world audience. The witnessing of a special player is being written into footballing folklore.

Cristiano had the desire and determination at an early age to reach the pinnacle of his sport, “I want to be the greatest player on the planet” the words spoken by the Madeirian man himself.
To be deceived by Ronaldo’s model type features, perhaps, hides the Ron’s work ethic, who practices with the greatest of desires, to harness the most wonderful of talents.

The Football Column revers the man with the ‘Midas’ touch, v the ‘Man from Madeira’ with the gold laden, of all that’s Madeirian, of the two chosen ones.

As a one sided player, Messi relies heavily on the adjustment of the body movement, and quick footwork, upon receiving the ball, to re-adjust to his favoured left foot, the balance is of the highest order, due to the low gravity projection of Messi.

Ron prefers the right foot, but is a two footed player whose movement is not restricted either side of the left or right upon receiving the ball.
In conclusion, Ronaldo has the edge in this department, a hard driven pass towards Messi’s right foot, might see Lionel struggling in this area.

Messi’s mesmerising jinky runs, gives the illusion that the ball is glued to his left foot of ‘Midas’. Low gravity players invariably have quick inter-changing movement, and great balance, to coincide with a pass and move game, at breathtaking pace, for this particular skill.

The two footed Ron is more of an exposure player in this area. Standing at 6ft, the low gravity asset is not of Ronaldo’s, who has to work much harder on balance and body shape upon moving the ball efficiently and at pace.

In conclusion Messi has the greater skill, with his movement and balance.

The most basic of ball skills, with the Ron’s chest control being more varied than Lionel’s. Ronaldo can leap high for the control, where in comparison, Lionel relies on an above the waist high ball for continued control due to Lionel’s small stature.

No contest, Cristiano terrorises defences with his sheer presence and tremendous heading ability, can leap high, and stay strong in any aerial battle with the 6ft defenders. When running in at pace, the Ron is virtually unstoppable. Messi in comparison, has good heading ability, but is no threat to defences with the high driven crosses. Ronaldo’s 6ft frame outweighs Messi’s heading skills by some margin.

Again no contest, Ronaldo’s physical presence leaves Messi’s physical challenge in the shade due to his stature.

Both on par with the strikes on goal skill. Lionel’s efficiency is to caress the ball into the net with precision placement, and can achieve the same on long distance shots, as Messi injects more pace into the art of shots on goal.

As for Ronaldo, an injection of pace normally coincides with a quick strike on goal with either foot, and on occasions, the shot is so venomous, that the keepers refer to the ball nestling in the net within a split second.

Two great free kick specialists. Both can drop the ball either side of the keeper with angled shots at pace, or a slow mid air projectory, to deceive any keeper in the world.

The forte which Ronaldo has above Messi in the free kick zone is the ability to dip, swerve, and drop the ball at pace beyond the defensive wall. The only player in world football who takes the free kick coaching manual apart, as the strike is not on the boot laces, but between the lace and the forefront of the boot, an unheard of technique, but Cristiano has created a new challenge, which no other world player can match.

Messi always hits the target, where as Ronaldo can fail on occasions, due to his insistence to inject more power into the strike on ball.

Both players show great fibre towards the team ethic, but occasionally Ronaldo can question his fellow team mates, Lionel’s driven cause reflects in the Argentinian taking this category.

That Messi covers more blades of grass during 90 minutes than Ronaldo, where the buckets of sweat would out weight the Ron’s, Messi wins this vote.

Total confidence from both superstars, but perhaps Ronaldo’s arrogance and feeling of invincibility, would on occasions take him into areas of the pitch to inflict hurt on the opposition area, where Messi might not transgress.

Both players have had long injury free careers, both on a par.

Messi is more pleasing on the eye for the footballing public, and takes the vote.

Confirms that both players are on level stats, but the technical skill efficiency area, is ahead by a small margin.

We shall continue to watch the two greatest footballers on the planet, Lionel Messi and Cristiano Ronaldo. 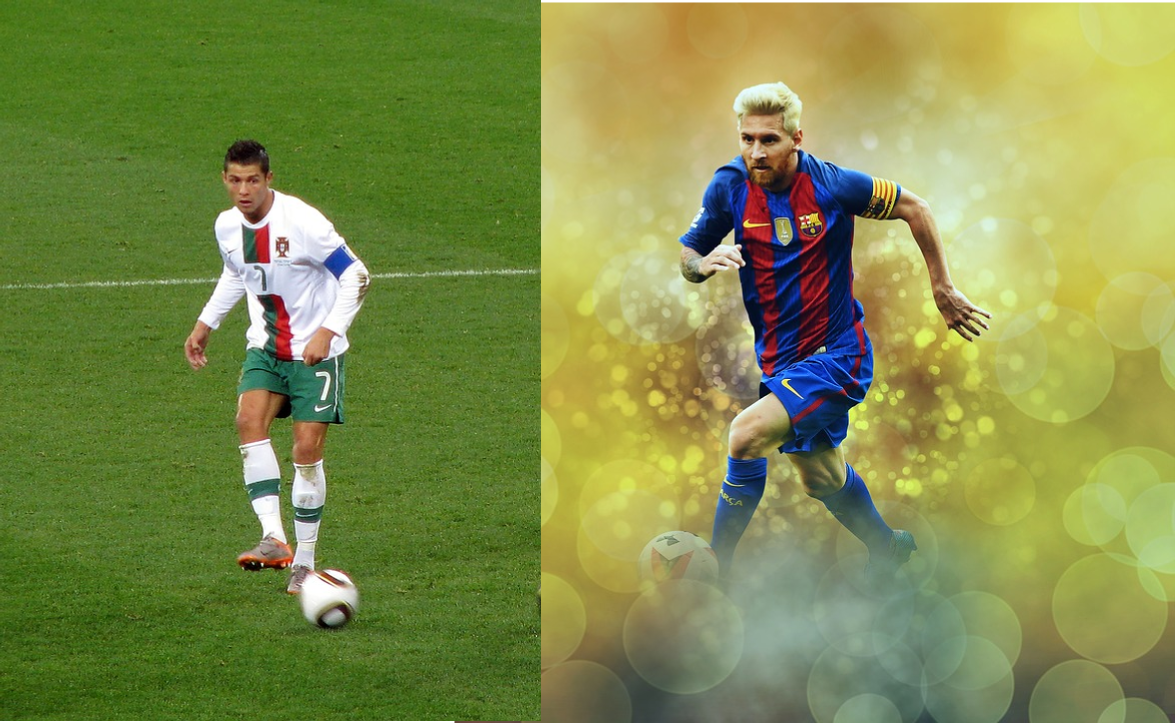 A Mixed Bag of Diversity
Scroll to top